Explanations listed below show what the device is doing automatically. Your task is limited to replenishing water and maintenance!

There is no lack of “capillarity, gravity and warm air” in all living rooms.

Absorbent paper (capillary), tube and tube systems can help transform gravity and heat into sources of energy. But they need to interact properly if they are to be exploited meaningfully. But if they are, they become fully automatic switching and control systems.

Weather as the guiding paradigm:
Our 3D humidifiers are modelled on clouds and rain. There is always wind before it rains! If rain drops down into warm dry air, some of the water in the drops will evaporate, cooling the air. Air becomes heavier and starts to move, thus creating wind! The drier the air below the cloud, the more wind it will create. 3D humidifiers use this natural rule to induce air circulation. 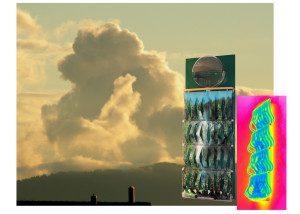 This device uses that a full hose water accelerates down and, is it placed over a basin edge can suck out the part where the smaller length of the hose is (smaller amount of water = smaller mass, larger amount of water = greater mass = suction direction).

Ecological fan
Energy by thermal circulation (gravity): The natural movement of air depends on its capacity to absorb moisture. This is because the air becomes denser, i.e. heavier, when the water evaporates. The mass in motion therefore depends on its depth, width and height, as well as on the degree of change in the quantity of air. When the humidity is low, more water is absorbed into the air, resulting in a higher density. This mass will therefore move faster than if humidity is high. Of course, the aerodynamic design plays an important role as well. The atmosphere is extremely pleasant, as a strong draft is not produced.

The hydro-pneumatic switch
Using energy from the weight of the water to control activation and deactivation: Gravity (weight of the water) causes water to flow from a container, whereby the water has to be replaced by air. In our system of guiding water and air flow though tubes and hoses, we use these two factors in such a way that they obey the laws of humidity. The water pressure causes air to be sucked over a snorkel during water drainage. The outflow of the water also causes the snorkel to close, thus stopping the flow. Adding a hose to the snorkel allows us to control the process remotely.
The water in the upper, open basin can thus be transported to where it is needed, in our case an evaporation panel (poster). Once it is saturated, it drips into a collecting basin and closes the hose (remote control) fixed there. This stops the supply of water to the consumer, the “panel”. The water must first evaporate before more can be sucked up to the panel. If the water in the collecting basin evaporates quickly, then the flooding process triggered by the capillary pump also regulates itself in shorter intervals. To recap: Draining water from a container sucks air through a hose from the collecting basin. The transported water is fed to a panel (via a capillary pump). The excess water (when saturated) interrupts the airflow by draining into the collecting basin and closing the hose. When the water in the panel is evaporated, air flows into the hose and water travels back to the panel.

video blow: 3 min. 33 sec. only in german language at the moment 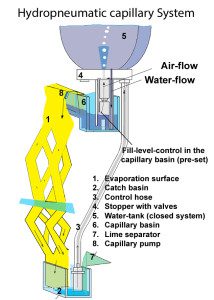